Ever vigilant, Moran tugs have been involved in many events where their assistance proved critical. Following are just some examples of situations where we have willingly rendered assistance and accepted no compensation.

Early in the morning on September 8, 2019, while transiting outbound from Brunswick, GA, the car carrier Golden Ray suffered a casualty, became disabled, and listed 90 degrees on her side. Nineteen of her crew of twenty three escaped the vessel with the US Coast Guard and other responders rendering assistance. Once the Golden Ray was stabilized it became apparent that four engineers were trapped in the engine room. Moran tugs pushed the disabled Golden Ray into shallower water where the vessel was stabilized and the Coast Guard was able to cut access into the hull and rescue the remaining four mariners.

An ongoing project to salvage the Golden Ray is underway with Moran and Moran Environmental Recovery (MER) playing active roles within the overall response team.

Three fishermen were abruptly thrown from their capsized boat amidst an extreme squall. They wore no life preservers and one of them could not swim. Hearing a radio transmission describing the overturned boat, Morgan tug Sewells Point headed to the scene of the emergency. The Sewells tug crew threw a life ring to one man and a life sling to a second. The Coast Guard was able to rescue the third man who was attempting to swim to safety in the chilly water.

The Sewells Point crew pulled in the first man hanging on the life ring. They tried to recover the second man with the life sling, but he was too weak to grip the sling properly. Sewells Point engineer Jonathan Moore and deckhand Josh Brown saw that they had almost run out of time and they quickly improvised a rescue. The crewmen laid down together on a fender, locked their legs into the fender’s structure, hung over the side of the tug, and pulled the exhausted man by his arms up to safety. All three fishermen were later taken by ambulance to the hospital and no injuries were reported.

Responding During the 9/11 Attack 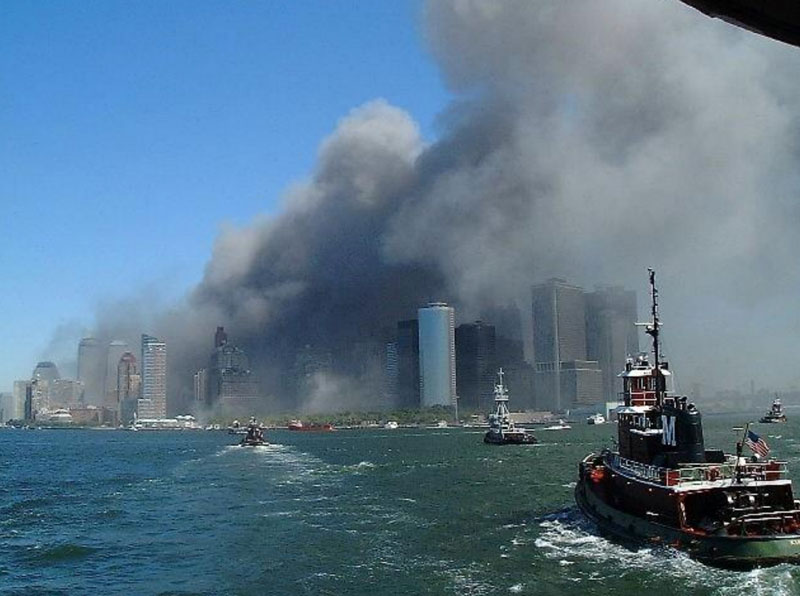 Life as a mariner involves unique responsibilities, the most notable of which is the obligation to render assistance at sea. On September 11, 2001, Moran crews in New York Harbor joined the rest of the New York marine community by responding immediately to meet the needs of those who were trapped in New York City.

It was a day the Moran family of employees will never forget. Shaken, but resolute, our captains worked shoulder to shoulder with other commercial and private mariners to help with the rescue of lower Manhattan’s residents. Our tugs and their crews also worked around the clock with those same volunteer mariners, serving as supply boats, carrying food, medical and other supplies into the City and unloading them with the assistance of the New York and New Jersey Police and Fire Departments.

Sixty-five Moran crew members from 11 of Moran’s New York tugs were among the many maritime workers who received awards for their work that day, together evacuating an estimated 500,000 people in less than 9 hours. Moran tugs logged a total of 256 hours during the evacuation, with each tug taking more than 100 people onboard each time they made a round trip from Manhattan to a safe location.

The crew of the Mark Moran rescued a Baltimore area fisherman who had fallen off his boat, which was unmanned and circling dangerously around him in the water. Using an onboard life sling the Moran crew was able to haul the man to safety while dodging the erratic boat. Following the dangerous rescue, Moran’s Baltimore port engineer designed a new special rescue ladder that better overhangs the tug’s hull for use in future rescues. Continuous learning leads to continuous improvement – that’s the Moran way.

Another dramatic rescue occurred when Captain Ernest “Snuffy” Smith of the Moran tug Cape Charles, made a 20’ jump into the water to save an eight-month old baby and her mother who had fallen off a bridge into the Moon River in Savannah. Smith took hold of the baby immediately and proceeded to try help the mother. The mother was not a good swimmer and was flailing against the current and Smith, making it difficult for Smith to keep the baby above water.

Smith managed to get the mother to some wooden piling with a small rope to hang onto, while he swam the baby toward shore. A bystander lowered a crab trap which they used to hoist the child to safety. Smith returned for the mother and successfully brought her ashore as well. Smith has served as a captain with Moran since 1981.

Another instance of valor occurred when Moran Captains Hanna and West of the Lizzy B. Moran tug rescued a State of Virginia pilot who had plunged 40 feet from a coal carrier into 40 degree water. The fallen pilot, Captain Chase Huffman, was trapped in a four-foot space between the ship’s hull and the pier. The pilot was wearing a float coat and his DGPS strobe flashed his location, so the crew quickly tossed him a life ring. Frigid temperatures, head lacerations and a fractured pelvis were making it impossible for Huffman to maintain his hold on the ring.

Onboard the Lizzy, Captain West, Bert Swink, Chris West and Josh Wiggins climbed onto the pier and managed to manuever a life sling around the pilot’s body. Using brute strength, the foursome finally hauled him onto the pier 20 minutes or so after he had fallen in the water. After doctors at the hospital raised his body temperature and stabilized him, Captain Huffman signaled a grateful thumbs up.

The crew of the Eugenia Moran rescued the Miss Stacey tugboat, owned by Seaward Marine Corporation, after it became trapped under a bridge span of the Memorial Bridge. The Miss Stacey was assisting with the demolition and deconstruction of the bridge, when it suddenly became pinned under the bridge’s support structure. Once entrapped, the Miss Stacey began severely listing and taking on water.

Fortunately, the Eugenia Moran was working upriver and managed to get to the Miss Stacey within ten minutes of hearing her distress call. It was a cold February day and the powerful Piscataqua river current raged. Captain Holt of the Eugenia and his crew gently pulled the disabled boat from the bridge, saving the Miss Stacey from capsizing and sinking, and protecting the crew against certain hypothermia.

And, Moran has attended to more than just at-risk people and vessels over the years. Captain Kyle Keenan, of the tug April Moran, spotted a baby great horned owl frantically struggling to climb onto an oil boom. Fashioning a lasso out of a heaving line, after several tries, Keenan finally pulled the owl to safety.

Wrapping the baby owl in a spare pair of pants, Keenan and his biologist fiancee Shelley Watson, took the bird to the local emergency vet. Returning for the owl the next morning, Watson and her father (who works for the US Fish and Wildlife Service), successfully released the bird to a substitute great horned owl family and the owl reportedly fared well.